I made several experiments to find out what Perl versions are supported in Travis CI.

Here is .travis.yml with the list of all available Perl versions:

In Travis CI documentation it is written that the exact Perl version can change over time:

As time goes, new releases come out and we upgrade both Perlbrew and Perls, aliases like 5.14 will float and point to different exact versions, patch levels and so on.

There is an interesting "feature" in Travis CI (actually it is a bug). Travis CI does not validate version for correctness. I've written .travis.yml where I have specified non existing version "5.26" (this version will appear in the future, but now it does not exist). I have also specified absolutely impossible versions like "-1.10" и "asdf". Travis CI thinks that these numbers are correct and it passes them to Perlbrew. Perlbrew silently says that there is no such version, but the build continues and the system uses Perl default version 5.14.2. Such behaviour is completely wrong. System must end such build with status "errored".

I've tried to specify string "123; ls; who" as a version number, such build has finished with "errored" status, but the build has fallen not on string validation, but on string usage.

Any system must validate user input. Travis CI does not do it and it is a bug. 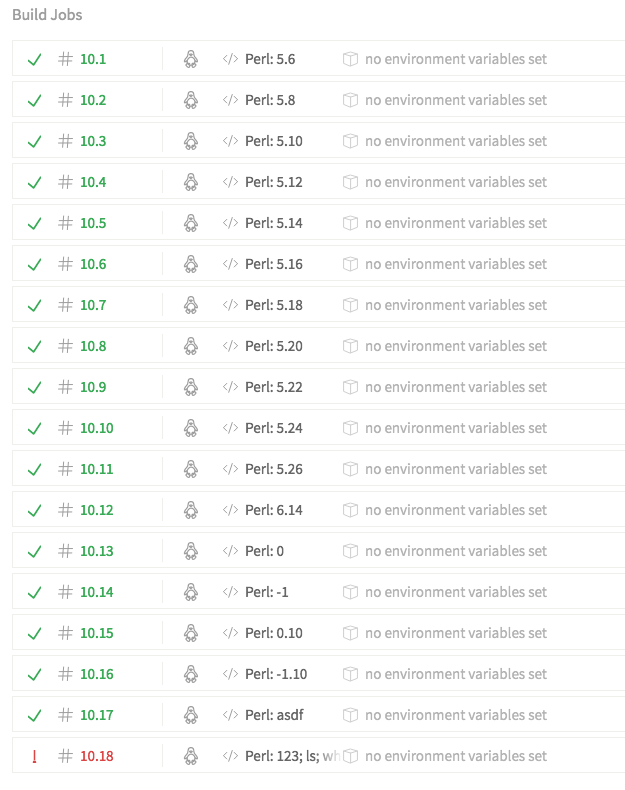 It seems that when you specify language: perl in .travis.yml and do not specify any perl versions the build is run in some other environment. So for myself I've decided that if I need to run tests only for one Perl version, I will explicitly specify the latest perl version available in Travis CI.

All my experiments live in several different branches in GitHub repository bessarabov/perl_versions_travis_ci. And here is a link with Travis CI build results of this repository.

Despite this strange setup and validation bug, Travis CI is a superb system and they do a great thing with free running tests for open source projects.